A downloadable game for Windows

You're late to close the office. Your boss demands you to leave until 12:00 AM, or there will be consequences.

Assets in repository's readme in github:

Great game! but don't waste food and eat your hot dog whoever left it! lol

Yooo I really enjoyed this game this was supposed to be uploaded awhile back but got really busy still wanna let you know great job and keep up with the great work.

Not gonna lie i enjoyed the failed ending more. Trying to get the good ending was really fun though. CHECK ME OUT!

I loved this game from its comfy jazz to the creepy ass mona lisa screaming in the halls once all hell breaks loose. The game was quite well optimised too because it ran smooth on my low power laptop. Only disappointment i had was the ending scare as it kind of stops in the middle. I was expecting a fnaf style jumpscare but this gameplay is a few weeks old so ignore if the dev has updated it. Other than that loved the chore! i mean my real employment job in game!

The game is generally cool! I liked it so much that I even made a letsplay based on it. If you are interested, please take a look :)

Good game though it's funny how it wasn't the main thing i was most concerned about at the end there.

Enjoyed the atmosphere and the objectives in this game. I feel like the phone was a little hard to read and the ojbective due to the size of the text. Apart from that decent short horror game

XD i found it very funny when there's no jumpscare whatsoever when you got devoured by the MEATBALL-MAN this is my perspective. make sure to show some love, or considered to sub for more. ty........

This game was pretty good. I like the atmosphere and objectives, but I feel like it could have had some jumpscares in there.

This was pretty great. Good atmosphere, some solid spooks, and some goofy campy-ness that keeps it nice and fun, check it out!

Ever wanted to feel like a wage slave? well, for those more interested in watching than playing you can watch my playthrough here:

thanks for making games!

was a very fun game we are interested in finding the other endings!

Hey, this game wasn't bad. The atmosphere and music was great and I got the 2nd ending as I think most people did. The only thing that needs fixing is the ending scare looks (not trying to be rude) but cheap/low quality. The monster looked terrifying though. Cool game. 8/10

Thank you for your kind words! This means a lot to us. Great video! (E continue jogando jogos no youtube!)

Good short! Can you send me the Monalisa wallpaper? 😂

Thanks! Check out the github page for the mona lisa link

Reply
seelroy355 days ago
This is the second game I've played in recent times that takes place in an office after hours. That alone sets an uneasy feeling, like I know I'm allowed in the building, but it's just off-putting. So while playing Late Work I found myself generally just uneasy. The music was absolutely bomb though.

The game did eventually scare me, however getting there was a bit of a lackluster experience. Throughout the game you run around playing janitor, despite apparently holding an IT position. You're tasked with picking up after your co-workers, throwing away banana peels, crumpled up papers, and even a hotdog. Who leaves a whole-ass hotdog just lying about? About as odd as me having to pick up after my co-workers despite having my own office.

After that you turn the lights off, and then realize all the electronics are still on. So you go about turning off all the electronics. Throughout all of this borderline nothing happens, except the radio turns on and plays some garbled demon speak.

Eventually you see a gigantic chicken nugget walk by, and while it made me uneasy because he walked the direction I had to go, he really isn't all that scary. So you follow him down to the fuse box, and that's where you see what really ought to have been the big bad spooky dude. A head with spider legs. Absolutely terrifying. I did not want to go down there, but I knew I had to. Bum rush the fuse box, and then big chungus lumbers over and that's it. While my heart is thankful the game didn't end in some scary jumpscare, I'm kind of bummed because it overall felt lackluster and underwhelming.

Good short horror game! Honestly surpassed my expectations with this one, I like how you kinda have to learn the game before you can win. Or at least I did bc I'm slow 😂😭 anywaysss, good job dev! 👍🏾

Loved the game, had fun testing it.Got both endings.

Nice lite and quick game keep it up

A short but interesting little horror game , with some very hilarious clunky physics that frustrate and entertain you at the same time.
The setting and atmospherics are nice and give you the feeling of something sinister is in the background and as you progress through the game your suspicions become confirmed and you need to act fast or suffer the consequences.

The first and second ending are a nice touch to the game , it is always great to see more than one ending to a game as it gives the game itself more dimension and more to play around with.

The game itself is not what you would call "scary" but it definitely conveys a strange and creepy factor with a big helping of "what the hell?"

I'm glad to hear that! it is exactly the feeling we wanted to pass xD! Thanks for playing our game and posting on yt! Nice video

I was so ready for this to be a joke game with that smooth jazz intro, shook when I found where the music was coming from... Maybe I'm getting soft but this really spooked me, so fun!!! The separate endings were fun to get too :)

Thanks! I'm glad you had fun playing it, that is what I was hoping for :D

really liked this, insanely creepy. i would like to offer you to use my music to be used in commercial-free stuff for a link back. here it is, i can definetly make some more oriented jazz soundtrack as i heard in the game. i studied and composed lot of jazz, just haven't released any. thank you so much

Thanks! I really like jazz and often hear some when making a game. I think jazz can make a game very comforting some times, that's why I try to add them in most of my games. I'll check out your yt page. Great music btw!

thanks ♥ u can contact me for anything on my instagram @lloydvaan or my mail: arga.gonzalo@gmail.com if you are feeling formal lol.

It was pretty interesting. I kinda liked the concept, but a little bit upset that I would had to play everything again to try a different ending =( otherwise, I liked it! Good job, man

Thanks for playing! Glad to hear that you liked it!

What Else Can I say This Game Scared the ever loving crap out of me. Well Done

haha glad to hear that! Thanks for playing our game

It took 3 try's but I finally got ending

Reply
BerryDeaf360 days ago
Nicely done. I thought the idea of trying to beat the clock was a great idea. I do wish the text at the bottom were a bit easier to read sometimes. The phone can block it and once in the game the text changed too quickly to read it fully. However, the music and sounds were really well done. I definitely felt creeped out by that one workstation. The monster was unique looking and cool. I would make the jumpscare a bit quicker to really build up that fear. I recommend having the monster sprint at you rather a short walk. I enjoyed playing it. Looking forward more from you!
Reply
gubebra358 days ago

Thanks for your feedback and suggestions! This help us a lot to always get better. Nice video!

This was a pretty fun game!

This was fun and I really enjoyed getting both endings.

I only have two suggestions/critcisms; maybe, place the cell phone on a different part of the screen? Even though I could move it; it really bugged me that it was covering the text. Other thing was trying to pick up and discard the trash..I kept dropping it...but, maybe, that's a me issue. 🤣

I loved the creepy atmosphere when the room went dark and silent after I turned the radio off. I also really liked the creepy sounds the radio was making and the monster..

the game is cute and creepy. Great job! Although , I think the protagonist may need to quit his job as i'm pretty sure the company is violating several osha regulations. 🤣

Haha thank you! We will think about your suggestions, there are many things we want to change! 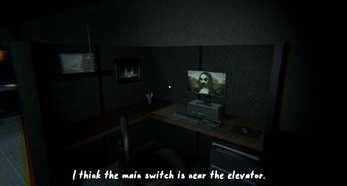 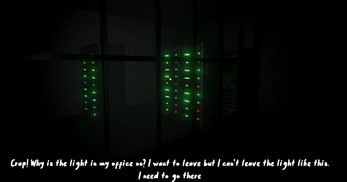 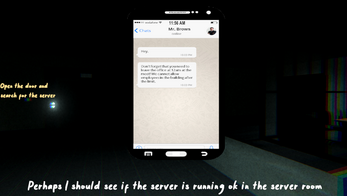 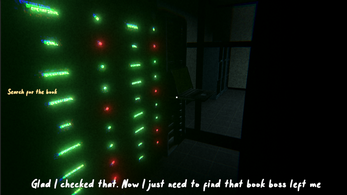 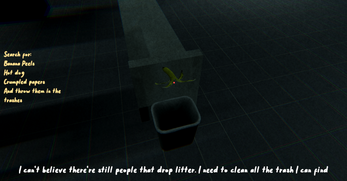 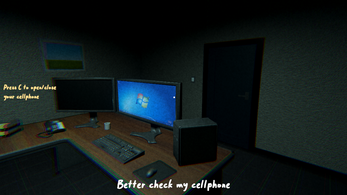 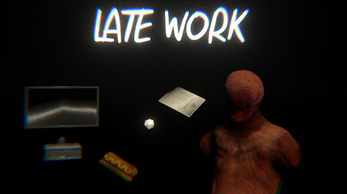